"Born to die, But not before them!" 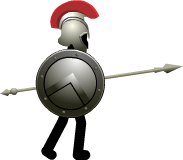 Speartons are the defensive tank units of Order.

Speartons have a large spear in a fashion similar to that of the antiquity or any other Hoplites of the time meaning they wield a shield and a spear along with a helmet.

The Spearton has two abilities which are meant to be used mainly defensively, but can also be used offensively.

This ability costs 50 gold and 50 mana to research. This ability is togglable. When toggled on, a Spearton will take a stance resembling a phalanx as shown in the picture. The Spearton will take 40% less damage and can use their Shield Bash ability. However, this ability will be automatically toggled off if the Spearton is commanded to move or attack in any way or manner. This ability is very useful when tanking for weaker units like archidons, magikill, merics etc. You can also use this in front of a wall to protect it from ranged units and increase the survivability of the wall.

This ability costs 50 gold and 100 mana to research. This ability can only be used if Shield Wall is on. After patch 1.89 the Spearton will automatically use shield bash should any units get too close while using shield wall. Upon getting hit, the unit will get pushed back and stunned. This is useful for keeping certain units out and for buying time. More advanced players can use this offensively by toggling shield wall and then quickly toggling it off after the Spearton uses the shield bash. That way they get an extra stun on a unit.

Speartons are highly versatile. They can be used offensively due to their speed and damage, or used defensively with their abilities and health. As such, Speartons become a central part in many strategies, more so since the auto-shield bash patch. One of its uses is when the opponent has a castle archer, you can just run in a Spearton and then toggle shield wall. The castle archer can't do very much damage. You can also use bash to prevent a unit from garrisoning. Using this with multiple Speartons will increase the number of units you kill.

"Spearcher" is a very common strategy as the archers provides ranged DPS and kiting ability, while the Spearton can tank for the archers. Along with this, both move at approximately the same speed giving mobility and the ability to easily micro the army together.

Community content is available under CC-BY-SA unless otherwise noted.
Advertisement