Stick War: Legacy is a mobile game by Max Games Studios, that is available on iTunes and Google Play. The Alpha was released for download on October 30, 2015.

Stick War: Legacy, according to the hints posted on Stick Wars Universe, is a spinoff of the original game, Stick War. A few control differences are obviously gonna be there, as well as slightly better graphics, but the overall gameplay and story will be retained.

Stick War: Legacy has multiple save profiles, visual upgrades with the armory as well as a gem store for powerful spells.

Click here to open the game's page on the app store.

The normal mode based off the original Stick War.

"The Crown of Inamorta" tournament

"The Crown of Inamorta" tournament mode or simply tournament mode is an upcoming mode announced 2016 March. There will be several AI players to play against. Each character has varying difficulties abilities and skills. Some of the better players will even control individual units and try to target down your back row units. This will add a ton of replayability and each tournament will a new random order of character and levels.[1]

Add a photo to this gallery

There is a gem shop for powerful spells, there you are able to buy things with gems or unknown currency represented by a pickaxe, which is not released yet.

The shopkeeper looks like a magikill (Wears the hat and has a beard too), but with a orange wizard hat instead and with glasses. A person like him teaches you how to play the game, but he is without glasses. It is most likely he is the same person.

You can earn gems by watching a 15 seconds video ad for 1 gem, you can do this infinite times. You can also buy gems. 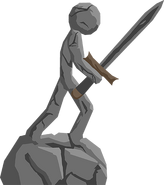 Rough concept of the armory 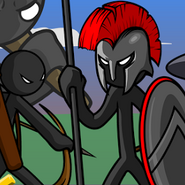 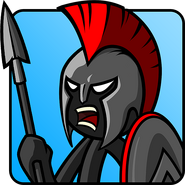 Add a photo to this gallery

Retrieved from "https://stickempires.fandom.com/wiki/Stick_War:_Legacy?oldid=5347"
Community content is available under CC-BY-SA unless otherwise noted.